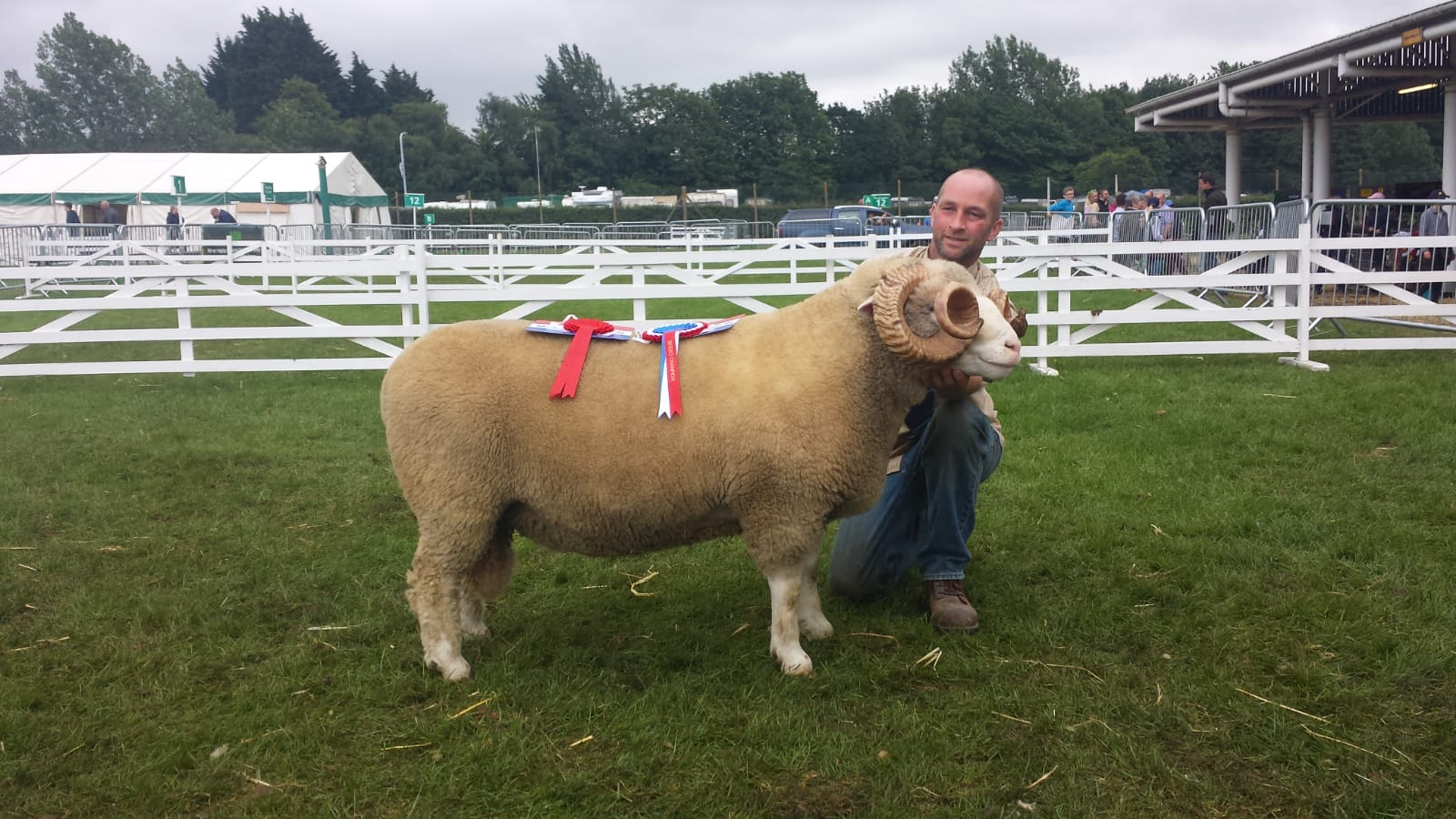 Tuesday 9th July saw the judging of the Dorset Horn and Poll Dorset classes at the Great Yorkshire Show 2019. An increased number of exhibitors on the year, including some for the first time, turned out an excellent show of sheep. William Carson from the renowned Downkillybegs flock in County Antrim was tasked with the days judging. Although the start of the judging was delayed due to an overrunning breed in the same ring, a strong audience of spectators stayed on to see the proceeding selection of the days breed Champion.

First class up was the aged and shearling ram class. Standing top of the line was the much-admired shearling Horn ram, Staverton Arnie, exhibited by Richard Fitton. Sired by Sandy Lane Wolf and purchased at this year’s May Fair where he was crowned Best Horn Exhibit, Arnie is now one of the stock rams at Mr Fitton’s Dynamite flock based in Bolton. The 2nd prize ram in this class was Richhill Zinfandel, sired by Ballytaggart Trojan, exhibited by Mr Alec Steff Waggoners flock. Coming in 3rd in this strong class of rams was another Richhill ram, this time Richhill Xuberant, presented by Mr Fitton, a ram that had an impressive show career in Northern Ireland as a lamb.

The female classes followed with one of the biggest turnouts to date with first prize in both the aged ewe and shearling ewe classes going to Richard Fitton. The ewe lamb class was topped by a very correct and stylish January born ewe lamb from Mr Welsh who was attending the show with Poll Dorsets for the first time. She was sired by Roundshaw stock ram, Downkillybegs Watson. This ewe lamb later went on to be Female Champion and Reserve Overall in the open classes. In addition to this the ewe lamb also took Female and Overall Champion in the Northern Dorset Breeders Club classes. In a very big group of three class, Odgers and Braithwaite, Quarrydale flock, claimed the top spot with their horn group, which included their show ewe ‘Becky’ who the family have had great success with over the last couple of years.

Onto the championship, Mr Fitton’s Staverton Arnie was crowned breed Champion and Best Horn Exhibit after taking the Male Champion ticket. Mr Carson described his Champion as “very correct and full of breed type… tremendous example of a proper Dorset Horn tup”. To top this off on the Wednesday, Arnie went onto be Reserve Interbreed/Lowland Champion, only to be beaten by the day’s Supreme Interbreed Champion. It is the first time at the Great Yorkshire Show a Dorset has featured in the Interbreed prizes, which is a great success for Mr Fitton and the breed. It was also noted that this is the second year in a row at GYS, that the breed Champion from the Dorset Horn and Poll Dorset classes going forward to the Interbreed has been a Dorset Horn.

The NDBC would like to congratulate the prize winners and the entrants on bringing forward a tremendous show of sheep. We also extend our thanks to the judge Mr William Carson who did an excellent job even though it was getting on in the day before he could finish! We eagerly look forward to next years show, which is to be the host of the Dorset Horn and Poll Dorset Sheep Breeders Association’s National Show. So be sure to get those entries in early next year!!

For a full list of this year’s results got to www.northerndorsetbreedersclub.co.uk